The VDP2 (Video Display Processor 2) is one of the two graphics processors for the Sega Saturn. Unlike the VDP1 where its mainly used for drawing sprites and polygons, the VDP2 is used for pretty much everything else, whether it be drawing background screens, setting priority settings, or even palettes. And because of that, it is also much more difficult to use compared to the VDP1. The VDP2 has 512kb of RAM available to it for use with cells/maps/bitmaps/etc. and 4kb of Color RAM for setting palettes for VDP1 sprites and VDP2 screens.

Basically the VDP2 consists of several different background layers, called "Screens". These can be split up into several different types of screens - Normal Scroll, Rotation, and Line Screens. Normal Scroll Screens are meant for general-purpose displays and for scrolling images. Rotation Screens are meant for doing two and three dimensional rotation of an image(which is handy for doing large levels, flooring, etc. in 3D). Line Screens just allows the programmer to set a single color to the whole screen, or a color for every line. Here's a list of all the screens:

Note: If RBG1 is enabled, you can no longer use NBG0-NBG3, so keep that in mind.

The VDP2 generates the following types of displays:

Here's a description of how each frame is composed. The NTSC displays have been visually inspected and therefore have more details about them, whereas for the PAL modes only divide the display into the active display and blanking/border/sync areas.

When bit 2 of the HRESOx field is set, the exclusive monitor modes are enabled. It's not exactly clear what kind of monitor these modes are supposed to be used with, I would guess HDTV or possibly VGA.

Depending on the screen width, the following types of displays are generated:

These display settings are identical between a NTSC and PAL Saturn. The VRESOx bits have no effect on the display size.

It seems that while the LSMDx bits will enable an interlaced display, this is not required for the exclusive monitor modes. It's likely that enabling interlacing might adversely affect the display. The VDP2 manual recommends turning interlacing off entirely.

In each of those planes, there's are a number of pages(specified by the plane size register) which can be as many as 4. They're also arranged as follows:

Bits 13,12 of the RAMCTL register configure the CRAM mode:

Mode 3 is undocumented, but appears to be identical to mode 2.

In mode 1 there is no mirroring and the entire CRAM region can be accessed normally.

In mode 2 and 3 the CRAM address bus has some bits shuffled around:

This arrangement has the first two bytes of each four byte entry at CRAM offsets 0x000-0x7FF, and the last two bytes at offset 0x800-0xFFF.

This distinction between how CRAM is addressed is important if a program reads or writes data in one mode that is to be used in a different mode.

This is for the most part how the draw cycle works(may need some tweaking): 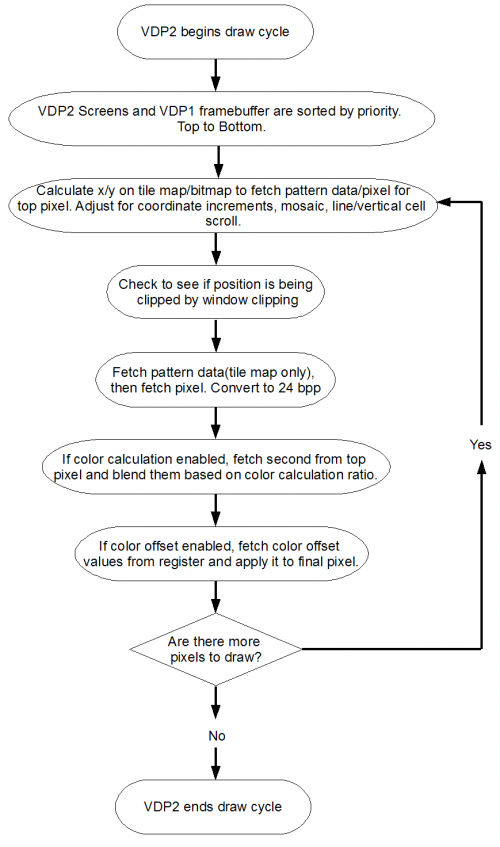 How to setup a scroll screen

The following will give a step by step process on enabling the NBG0 as a 256 color scroll screen.